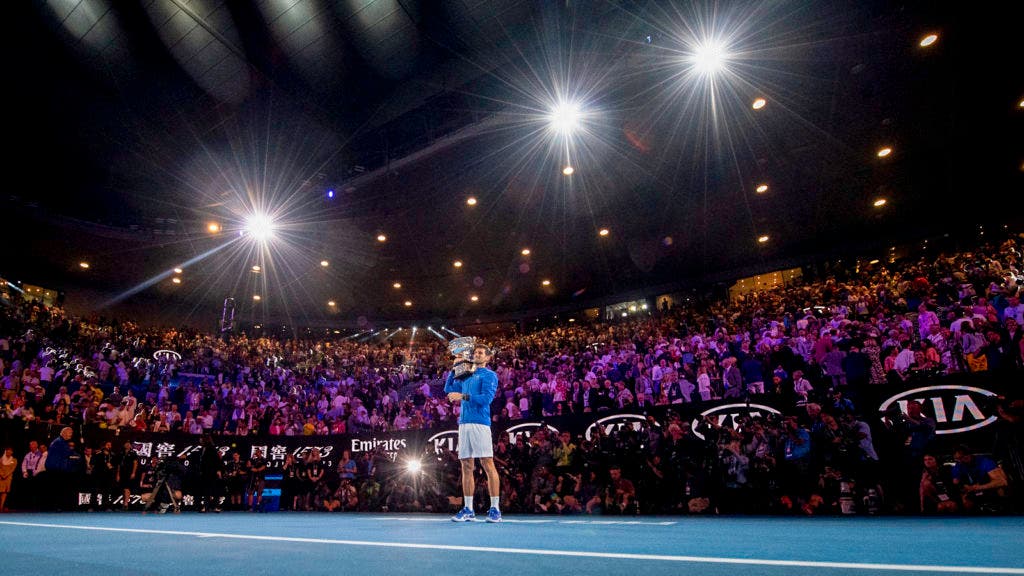 Congratulations @DjokerNole – King of AO and lots, lots more to come. You make it look easy, it’s not. Your dedication and hard work is there for all to see. More records await. Rocket. #AusOpen

208 days ago, @djokernole beat Tennys Sandgren in the first round of The Championships 2018.

It marked the start of a 21-match winning streak at Grand Slams, during which time he has dropped just eight sets ?#Wimbledon pic.twitter.com/6wQ4JI1ACV

Honestly, forget all the records and numbers for a while. The way that Federer, Nadal and Djokovic have all bounced back from adversity in their respective careers is what truly makes this the Golden Generation. Don't think we'll ever see anything close to this in any sport.

He fought back and ended 2018 as world number one.

He has now won all of the last three grandslam titles.(15 in total)

He is Novak Djokovic!! pic.twitter.com/dL9MlcYiAr

Like I've said before, when @DjokerNole plays like this he's virtually unbeatable. 9 errors in 3 sets vs Nadal… Unbelievable. #AusOpen

A truly superhuman performance. Absolutely ruthless until the end vs Nadal. #AusOpen

Djoker ability to go after the Vamos-Rafa Fearhand sets the tone and his down the line shots off both sides are so accurate not to mention does not miss even in breezy conditions, this is clinical performance

A masterclass performance by Novak. Simply superb. A record 7 @AustralianOpen titles. Major No.15 and counting. Too good ?

Nobody gets the better of @DjokerNole ?? pic.twitter.com/k0bDwXdDMy

SEVENTH HEAVEN ?@DjokerNole is the #AusOpen champion for the 7th time in his career ?#AusOpenFinal pic.twitter.com/wogRHWgaI0

A flawless match from the World No. 1…

.@DjokerNole picks up the 7th #AusOpen title of his career after defeating Rafael Nadal 6-3, 6-2, 6-3 in the championship match!

In the land of ?, this one is special. ? Congratulations to @DjokerNole for a 7th title in Melbourne ?? and another record. #N1vak #NoleFam pic.twitter.com/qSxdiCK2BW

What a performance that was from @DjokerNole ! Huge congratulations on winning 15 th Major over @RafaelNadal clinical, ruthless and unstoppable tonight ! Incredible ! ??????????????????

Such a great scene to witness. ⁦@DjokerNole⁩ and his fans… a crowd unlike any we’ve seen from set. ? pic.twitter.com/smkjeEOCIc

Djokovic played his best big match ever to rout Nadal for his seventh Australian Open title. He has won seven of his last eight major finals and has secured 15 Grand Slam titles. His mastery of his craft has never been better. The next few years will be a goldmine for Djokovic.

It s been such an amazing tournament and I can't wait for next year!!
Congratulations to @naomiosakatennis for writing history for ?? and to @djokernole for winning a record 7 @australianopen ?sans oublier nos frenchies @p2hugz et @nmahut ????✌️

That means it s an other @australianopen in the book!!! Thank you @5livesport for having me in the booth tonight alongside my great friend @clijsterskim for @djokernole vs @rafaelnadal
1/2 pic.twitter.com/NFP4ocQNNa

That was scary good from @DjokerNole tonight.

Haven’t since that kind of dominant hitting off the ground since ….. we’ll ever actually.. that was a next level performance from the Djoker .. #AusOpen2019 #nomercy

Haven’t since that kind of dominant hitting off the ground since ….. we’ll ever actually.. that was a next level performance from the Djoker .. #AusOpen2019 #nomercy

In the land of ?, this one is special. ? Congratulations to @DjokerNole for a 7th title in Melbourne ?? and another record. #N1vak #NoleFam pic.twitter.com/qSxdiCK2BW

@djokernole
Wow
No matter if it’s “shaysharka trophy” or one of 15 Grand Slams, Nole always brings the best out of himself.
A great athlete, human and a role model
So very proud of him… https://t.co/dNTH446cJW

Wow guys we did it #TeamDjokovic #AusOpen #15 ? #marian #uli #gebhard #miljan #ele #edo @jelenadjokovic. There aren’t enough words to express my gratitude for this group of people… https://t.co/RkIFT403x8 pic.twitter.com/9847BfN9hb

Find out more or adjust your settings.

This website uses cookies so that we can provide you with the best user experience possible. Cookie information is stored in your browser and performs functions such as recognising you when you return to our website and helping our team to understand which sections of the website you find most interesting and useful.